Where is my home, it was here this morning?

In the GC Bulletin dated 21st February 2019 it reported: "Tom Tate to Greenies: Show us the money"

MAYOR Tom Tate is challenging environmentalists to “show us the money” as the Gold Coast City Council gives the green light to buying up koala habitat.  Consultants warned a year ago that the city’s most significant koala population east of the Pacific Motorway would be lost unless authorities agreed to buy up land and relocate the threatened animals.

At a planning committee meeting yesterday, councillors recommended officers approach the “highest priority” properties as part of a buy-up of land identified at COOMERA, PARKWOOD AND COOMBABAH

Gecko Environment Council was appalled by the outrageous comments made by Mayor Tate this morning in the Gold Coast Bulletin, when he claimed the “greenies” were failing to protect koalas, by not donating to the koala habitat purchase fund.

Lois Levy, Campaign Coordinator said “These obnoxious comments by the Mayor demonstrate that he has no idea how hard “greenies” work for the conservation of koalas and other wildlife.

We must ask the Mayor why he has never bought a single block of land since 2012 for conservation/koalas with the Open Space Preservation Levy, that we all pay (greenies included) every year with our rates. This fund was specifically set up to buy conservation land and recreation land and, in 2016 he changed the purpose of this levy to stop it being used for conservation purchases!!!

If this Open Space Preservation Levy had been used as intended the extra koala levy may not have been needed.  To make things even worse the Mayor, with a complicit group of Councillors, has been selling off parcels of public open space, some of which would have been suitable for koalas, to pay for the unfunded cultural centre and art gallery.

The koala crisis is real. They are listed as vulnerable but unless something is done to stop the clearing of habitat and more land is bought for them, then they will be extinct on the Gold Coast within 5 years according to experts in the field.

Conservationists support Currumbin Wildlife Hospital and Wildcare and more recently wildlife carers in the fire and flood area of north Queensland, but they are ordinary people on average wages unlike the Mayor. Most wildlife carers use their own money to collect injured wildlife and then rehabilitate them.

Conservationists spend countless hours of volunteer time advocating for the koala and other wildlife to all three levels of government, but the developers’ voice is louder and gets the ear of government before ours.

Gecko is waiting to see if Council buys the necessary 1500 ha in one piece as recommended or in non-sustainable smaller pieces throughout the city. 1500ha is only the beginning of what is necessary. 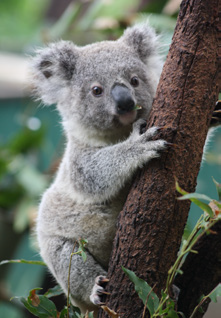 Local Groups Fear Gold Coast Beach Erosion and Homes Flooding if Climate Change is not reduced to 50% by 2030 Fearing serious damage to homes and hinterland rainforests along with flooding, tourism and community groups Read more…

The public consultation of the concept plans for the light rail stage 4 finished on 17th September. While there were certainly plenty of opportunities for residents of the southern Gold Coast to view the concept drawings and talk with Transport and Main Roads (TMR) officers, there were few answers to questions. Gecko’s full submission is available on web site - https://gecko.org.au/campaigns/liveable-and-green-city/

PAID VACANCY-The Campaign Coordinator, in representing Gecko across a range of community sectors, will undertake to respond to a broad scope of environmental issues with the support of the members of the campaign team. Campaign work is organised under the 4 fields of biodiversity, climate change, liveability, and sustainability in planning. See www.gecko.org.au for more info